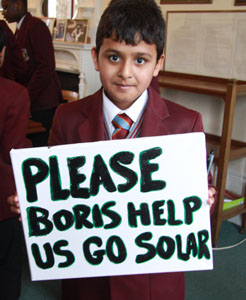 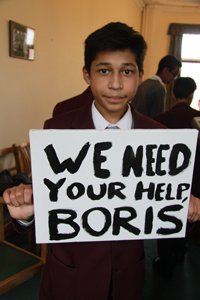 Shortly after launching our Boris campaign, we had received written correspondence from the former Mayor's office confirming that he would indeed be allocating some of his 2015-16 budget for the purpose of supporting the installation of solar PV in London's schools.

We initially responded by extending our sincere thanks and appreciation to Mr Johnson for not ignoring the pleas of London's pupils and the overwhelming majority of its inhabitants who were, and still are, very much in favour of solar power. However, the Government have since carried out huge cuts to the Feed-in Tariff which have seriously damaged the solar PV movement in UK schools, and by the time Mr Johnson had left City Hall; not a single school had installed any solar panels in the new phase of his RE:FIT programme, as per his promise.

However, every cloud has a silver lining, and in this case the silver lining comes in the form of London's new Mayor, Mr Sadiq Khan: a principled man who has promised to ignite a "clean energy revolution" and who has vowed to become London's "greenest Mayor ever".

Renewables for Schools salutes Mr Khan's bold ambitions and calls upon him to now use his considerable influence to help London's children build a brighter future by providing them with the opportunity to embrace clean renewable energy in favour of climate-wrecking oil, coal and shale gas generated energy.

“If the Mayor could get solar PV panels onto half of the roofs of London schools, it would double the amount of electricity generating capacity the Mayor has managed so far through his entire decentralised energy programme. That's why I'm glad the Assembly is backing my call for the Mayor to give this a really big push.”

These were the words of the Green Party's Jenny Jones at the London Assembly on the 23rd February, 2015. In contrast to the 13 votes for to 12 against for a 'Solar Delivery Unit' which would help deploy community energy schemes, the motion for Boris Johnson to deploy solar PV on London's schools was unanimously agreed.

So clearly there is a huge appetite right now for schools in London to be able to go solar.

And rightly so: only 7% of the city's 3080 schools have any solar panels installed. Friends of the Earth energy campaigner, Anna Watson, put it best when she said, “If every London school went solar it would save them more than £20 million a year, while cutting pollution and providing clean energy - but so far only a tiny number have been able to do so."

So what is it exactly about London schools which have made the uptake of solar PV one of the slowest in the country?

Many people point to the fact that London has the lowest uptake of solar PV in the country, but schools are not homes and pupils are not homeowners. The biggest problems we're hearing that London's schools face when it comes to the deployment of solar PV is lack of political leadership, inaction by the powers that be, and funding. Some schools are LEA run, some are run by a board of governors, and others are run by an even more complicated array of trusts and independent bodies. Getting everybody in one place to discuss the matter, let alone all come to an agreement, is both a time consuming and laborious task. Even with the best intentions, schools are very busy places which see priorities being replaced with other priorities seemingly on a daily basis. Then there comes the matter of funding. School financing rules mean that schools that have genuinely taken the decision to go solar are simply not being allowed to borrow the money to do so.

So how can Boris Johnson break the status quo and get schools in the capital finally going solar?

One possible idea is for Mr Johnson to essentially make it mandatory for every school with certain roof space capacity to install solar panels. Such measures would make schools effectively obligated to get up off their couches, onto their roofs and find the means one way or another. One only has to take a look at how quickly schools respond to other mandatory events, such as OFSTED inspections, to realise that if they need to achieve something within a very short period of time, they most certainly will.

Another option could be for Mr Johnson to set up a new type of fund which would enable schools to borrow money and effectively circumvent the International Financial Standards which are currently not allowing schools to put any debt onto their balance sheet. This would invariably put pressure on the Chancellor of the Exchequer, George Osborne, to make the necessary changes to finally allow all schools in the country to borrow.

There could even be the option of Mr Johnson simply allocating budget and installing solar on some of the best roof spaces within London, thereby enabling schools to enjoy the benefits of going solar immediately, and set a precedent that would motivate other schools and LEAs. Even

a small percentage of London's £17 billion budget for 2015-16 could see some serious solar PV being deployed across London, and with full payback being achieved within 8 - 9 years, it is money that could return directly back into London's budget.

It is not right that a pupil in London should not be able to benefit from solar power. It is not right that schools should have to rely on fossil fuel generated electricity which is slowly destroying our planet and is only benefiting the fat pockets of the Big Six. It is not right that London's pupils are being denied the opportunity to learn about renewable energy through a working example of their very own solar PV system. The business case for every London school to go solar is more than compelling. Energy independence, clean electricity, lower bills, opportunities of engaging with the pupils, the list goes on. Furthermore, opportunities for benchmarking against other schools remain the highest in London. London does have the highest concentration of schools than any other part of the country, after all.

But back to Boris Johnson. Much emphasis has been placed on his statement that solar energy is not suitable for central London, with many quick to attack his comments as proof that his views are out-dated and that he simply has it all wrong. Well for those who actually bother to find out about where Boris stands on the matter of solar, they will discover that on the contrary, he's really a rather pro-solar chap and much more so than your average politician. For example, Mr Johnson was one of the first to attack cuts in the Government's Feed-In Tariffs back in 2011. He has shown in various situations that he is all for solar power and despite of his previous comments, he has already stated that he believes there is "much more scope for generating solar power in London than we previously thought."

Should Mr Johnson decide to support London's schools and allocates some of his budget towards the task of providing real change for London's pupils, the ramifications will be enormous. At Renewables for Schools, we believe this revolutionary step will also present itself as the single greatest opportunity for the Government to implement their UK Solar Strategy's ambitions for schools. A real opportunity to stand up and take his place in history as the man who made solar power for schools a reality is being presented to Boris Johnson today. Not just through words, but in deeds, and throughout the hearts and minds of every pupil.

Who knows? Perhaps one day we'll all be referring to London's solar schools as Boris Schools, much in the same way people today refer to Barclays Cycles as Boris Bikes.

And we couldn't think of a more amazing legacy that anyone could possibly ever want to leave behind.

NEXT: EVERY SCHOOL A GENERATOR >

BELOW: The pupils of St Joseph's College ask the Mayor of London to allocate some of his 2015-16 budget, whilst Renewables for Schools' Director, Michael Hajilou, looks on: