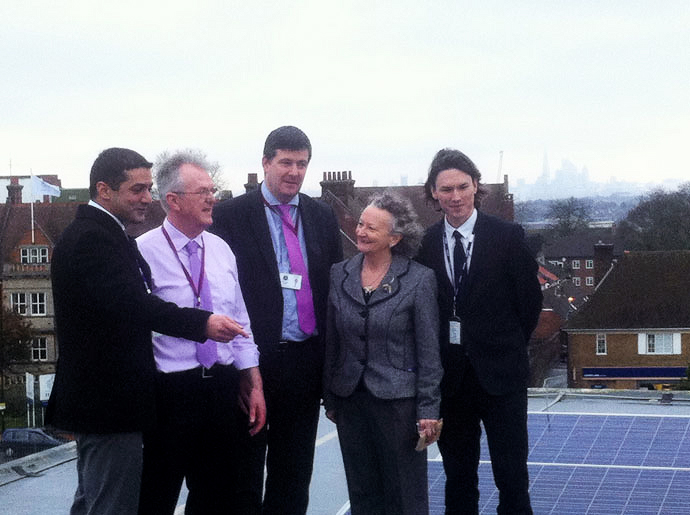 In her usual elegant manner, Baroness Jones took time speak with and listen to the Head and Deputy Head as they highlighted the problems they were facing following the FiT cuts. St Joseph's College were set to install nearly three times as many solar panels on their roofs before news of the FiT consultation brought them to the conclusion that it was no longer financially viable fro them to do so. Jenny also spoke to some of the pupils, who similarly shared frustration at the Government's decision to curb solar support and the lack of action by the Government to listen to what they had to say on environmental matters.

The visit was accompanied by Renewables for Schools' Managing Director Michael Hajilou and Friends of the Earth, who sent their Energy Campaigner Oliver Hayes down to cover the story.

Baroness Jones said: “Every London school should be exploiting their unused empty roof space for generating solar electricity. Sadly schools such as St Joseph’s are still the exception and the Government’s recent plans to severely cut the feed in tariff will make it even harder for other schools to follow suit.

How many more record-breaking extreme weather events must it take before the Government wakes up to the dangers of climate change?

The growth of renewables such as solar have a very important role in tackling climate change, but the Government’s deliberate attempts to stall this sector not only jeopardises London’s long-term economic stability and the health of its residents, but over 2,000 solar jobs in London which are now at serious risk.”

These sentiments were mirrored by staff at St Joseph's College, where Headteacher Sean Miller said, “The college is very keen to install more panels on the rest of our usable roof space. Plans are in their final stages of development with start-up funding already agreed with the Government body. This has now been abandoned, as the feed in tariff has been removed, it will now not be financially viable. This has caused great disappointment to the college community."

Whilst Deputy Headteacher Kevin Dwyer had this to say:

“It is very frustrating with the Government saying on one hand that they want to help to improve environmental conditions, and yet on the other hand doing the exact opposite and undermining the process by reducing Feed-in Tariffs to a level that will destroy the solar power industry in the UK.”

Local newspapers, the Croydon Guardian and Inside Croydon were also present and reporting the story as were ITN London, who covered the story on the local evening news.

“As communities in Cumbria and Scotland start clearing up after the latest devastating floods, the need for action on climate change has never been greater. Schools like St Joseph’s and communities all over the London want to invest in solar, but the Government seems determined to undermine them at every turn by removing support and blocking investment.

“It’s great that the London Assembly is adding its voice to the chorus of opposition to the Government’s planned 90% solar cuts. David Cameron must listen and urgently reconsider. Renewables like solar have the potential to be a huge success story for London, bringing thousands of high-tech jobs, and giving real power back to communities. But the Government must support, not scupper, this burgeoning industry.”

Oliver's sentiments were reflected by the pupils themselves, many of whom feel like they are being sidelined by this Government and their voice on environmental matters simply isn't being heard.

As one pupil, Jayden Adams, put it, "I think that they don't care. I feel like my voice isn't being heard. That's not good." 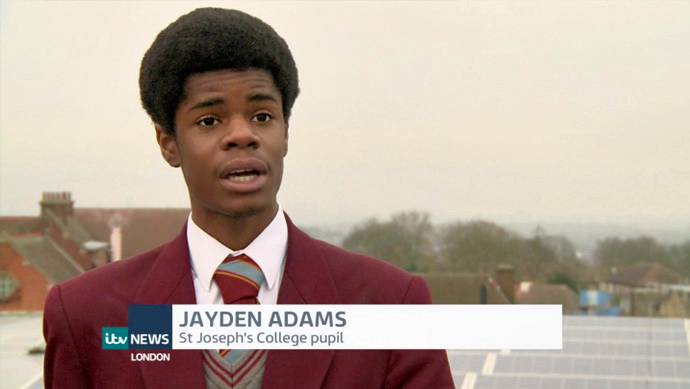 Renewables for Schools Managing Director Michael Hajilou was equally dismayed by the Government's failure to address the needs and wishes of the next generation:

"At a time when our Government should be eliminating subsidies for fossil fuels, the UK has become the only G7 country to increase financial support for fossil fuel production. This goes completely against the wishes of the British public, who have recently voted solar power as the most popular form of energy generation.

As the number of extreme weather events in the UK spiral higher and higher, this Government must now become accountable for the realities of climate change, and they must be looking to the rest of the world which already recognises solar power as a solution.

Schools are the beating hearts of our local communities and its children are our future. Making clean renewable energy accessible to them is not a matter of personal preference, it is a matter of our own survival."

Renewables for Schools would like to take this opportunity to thank Baroness Jones for agreeing to visit St Joseph's College and for her tireless support for the solar PV movement in London's schools. Renewables for Schools would also like to thank George Raszka and the rest of Jenny's team at the London Assembly who were instrumental in getting this story picked up. We're forever indebted to your hard work and belief in the solar schools movement.